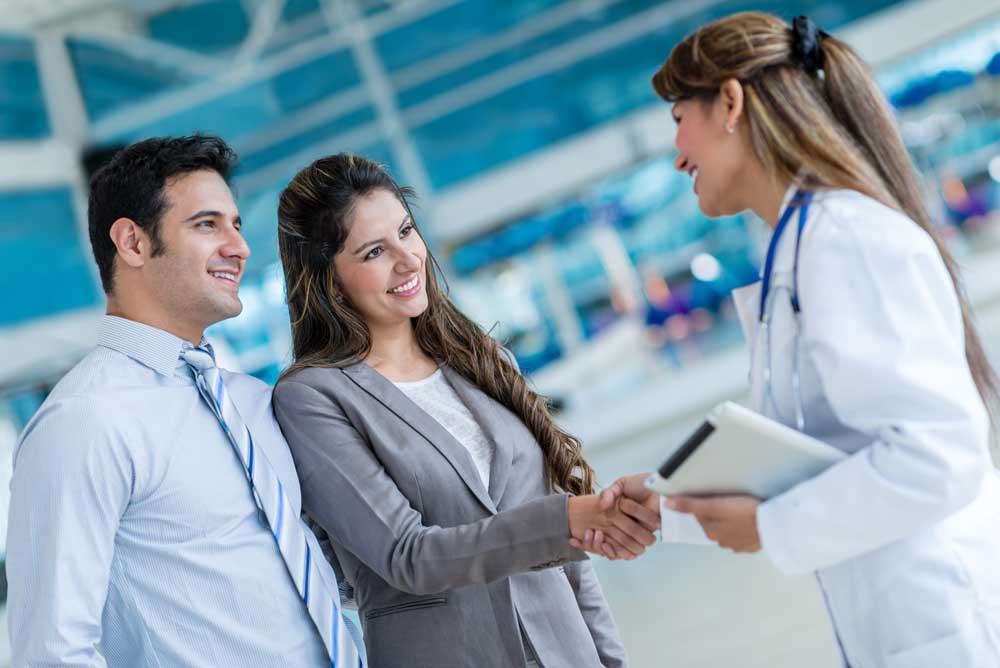 What Are Some of the Factors, Signs and Who Is at the Highest Risk for Burnout?

Healthcare workers are under a lot of stress. Their industry is facing a rapid increase in demand, largely due to an aging population. Then, corporate imperatives exert ever-increasing pressure to perform, regulations continue to mount, and then workers face economic and other pressures from outside the workplace. It’s no wonder studies show that nearly seventy-five percent of all healthcare workers are experiencing some level of burnout.

Burnout is a serious matter in any industry and is all the more dire when it impacts healthcare workers. The phenomenon arises from emotional exhaustion, depersonalization, and a feeling that one’s accomplishments, skills, or overall competency is lacking in the workplace. Each of these factors can possibly lead to poor decision-making, inattention, or other performance problems. Given that lives are on the line, burnout is a vital topic for discussion. This page is dedicated to discussing the issue of burnout in the healthcare industry in hopes that it will spark dialogue and eventual solutions for this public health threat.

Burnout is an insidious problem. We try to cover it up, but it is all but impossible to ignore. Healthcare professionals who suffer burnout tend to experience insomnia, an array of physical pains, loss of appetite, anxiety, and chronic fatigue, to only name symptoms related to physical and emotional fatigue.

Burned-out healthcare workers also become cynical and detached from their environments. They might lose their sense of enjoyment, become pessimistic about the future, and feel both isolated and detached from others. Here are some symptoms to look out for:

How Many Administrators are Dealing with Burnout?

According to a recent study, healthcare administrators are almost universally plagued by burnout. The Medical Group Management Association studied the phenomenon and found that forty-five percent of all healthcare workers reported burnout. Twenty-eight percent reported feeling somewhat burned out, while twenty-seven percent said they did not feel any burnout. Nearly three quarters of all professionals in one of the largest and most vital industries in the nation are dealing with burnout.

This indicates that more awareness and resources are needed to combat this issue. When healthcare systems begin to show signs of poor performance, perpetual attendance issues, and a general workplace malaise, they should try to diagnose whether or not burnout is to blame. To help identify the problem, organizations can employ the Maslach Burnout Inventory – Human Services Survey.

Once burnout has been identified, management can begin to assess its origins and address these one by one. It has been found that, when burnout is identified and its root causes addressed effectively, organizations see morale rise, performances improve, and absenteeism decline.

Burnout can manifest in a variety of ways. Perhaps one of the key ways that a patient might notice burnout is when practitioners depersonalize the people in their caseload. Doctors and nurses might be under pressure to spend restricted amounts of time with a large number of patients, thus resulting in the sense that patients are mere numbers to process rather than human beings with complex and highly individual problems.

Burnout might also manifest in terms of overall attitude. Stressed out nurses and physicians may become pessimistic and have a negative attitude towards best practices. They might cut corners so that they can meet workflow demands and end up making avoidable mistakes. Burned out clinicians who are becoming negative and depressed may blame their mistakes on others.

Burnout not only erodes one’s mental health, but negatively impacts overall cognitive performance. Burned out workers have shorter attention spans, reduced memory, and are more easily confused or overwhelmed. When burned out workers become depressed, they might find that they experience illness at higher rates. Infection and illness increase due to compromised immunity, exacerbating the mental deterioration so easily associated with burnout.

Healthcare Positions with the Highest Levels of Burnout

Physicians occupy some of the patient healthcare positions that experience the highest levels of burnout. In fact, more than half of all physicians experience burnout. Those who work in critical care and neurology are the most severely impacted, as nearly half of their respective colleagues have been identified as experiencing this issue. Close behind, family physicians, ob/gyns, and internists all reported burnout numbers close to fifty percent.

As for the other medical specialties, the picture is far from rosy. The group seemingly least impacted by burnout has been found to be plastic surgeons, who report twenty-three percent burnout. If a full quarter of any group is identified as burned out, there is indeed cause for concern. The picture isn’t much better for dermatologists. These specialists are the second least impacted group, and they report that one third of their population is burned out.

Nurses too are impacted by burnout. A full forty-three percent have self-identified as experiencing emotional exhaustion. Nurses also show the highest rates of depression among all workers in the United States. With eighteen percent reporting depression, the problem is twice as bad as the rest of the economy. Another option to help with Burnout is to obtain a position on the admin side of the healthcare business. Learn more about the different management careers available in healthcare administration.

Burnout and depression impact physicians at rather high rates. Depression can impact one’s entire health picture and is often paired with heightened anxiety, pessimism, negativity, and loss of concentration and focus. Physicians across a range of specialties were asked if they were suffering from both depression and burnout or depression alone. Interestingly, the group with the highest rate of both maladies reported only 20 percent, which is nonetheless alarming. When asked about depression alone, nineteen percent of the profession reported clinical depression and a full seventy percent reported colloquial depression. Colloquial depression was defined as a general malaise with physicians reporting that they felt sad, had the blues, or were otherwise down in the dumps a significant portion of the time.

Burnout is impacted by a number of external, controllable factors. Unfortunately, the malady also shows dramatic discrepancies when measured along gender lines. Women and men experience burnout at different rates. According to studies, female physicians report burnout at a rate of 48 percent, while their male counterparts are ten percentage points lower, at 38 percent.

While it might be true that men are less likely to report emotional or other weakness, it is unknown whether that feature of gender is playing a role. It is also possible that physicians might be more likely to be truthful when given an anonymous, scientific study. It could also be the case that men experience fewer social or other stressors on the job. Other studies have shown dramatic gender biases in STEM programs and professions.

Studies have shown that burnout rates are also delineated according to age group. While it might seem intuitive to think that younger physicians experience more stress and burnout since they are striving to establish a medical practice, early-career physicians report lower rates of burnout. The rates increase from approximately 35 percent for those doctors in the 28-34 age range to 50 percent for doctors in the 45-54 age group. After that peak, rates decline to approximately 41 percent for late-career doctors aged 55-69.

While there are often dramatic differences between different subcategories in the physician population, one area shows no difference. That is, when comparing self-employed and employed doctors, both reported the same rates of burnout. Each shows a 42 percent burnout rate. Since the two groups work under very different circumstances, it might seem odd that they have the same burnout rate. However, while the employed might find burnout from demanding performance markers imposed by hospital administration or others in the corporate hierarchy above them, the self-employed doctors seemingly have equal stressors in managing a business for themselves. In fact, self-employed doctors might put themselves under the exact stress their employed colleagues receive from others in order to compete with larger facilities.

Depression isn’t caused by one single factor. While the death of a loved one or some particularly traumatic workplace event can precipitate acute bouts of depression, the phenomenon itself is caused by many factors, and frequently several operating in conjunction. For doctors, their jobs tend to be their single largest source of depression.

Using a scale of 1-7, physicians were asked to rate various aspects of their lives and how each impacts their depression. Their jobs were rated the highest with a score of 5.6 for both men and women. Finances were in the second-place spot with male doctors rating this factor a 3.9 and female doctors assessing it at 3.7.

The only other area showing a dramatic difference between the genders was romance. Male doctors find their romantic relationships more likely to cause depression and rated this area at 3.1, while female doctors placed romance at 2.9. On the other hand, women found that family matters were more of a contributing factor in depression than their male colleagues. Female doctors rated family at 3.2 while men scored family a 3.1. Interestingly enough, doctors seem the least impacted by issues related to health. Both men and women doctors rated health at 2.9.

Burnout might seem like it’s a personal issue that only impacts individual sufferers. However, when a doctor or nurse experiences burnout or depression it becomes a problem for everyone in their world. This is because burnout impacts how they feel, which in turn impacts their behavior. One pessimistic person in a workplace can impact everyone around them. This might be particularly true in the case of workers who have leadership positions. Thus, a lead nurse who is experiencing burnout can potentially infect the morale of the LPNs and CNAs who work for them. When symptoms of burnout arise in a healthcare team, their attention to best practices is likely to erode under increasingly jaded attitudes.

Studies have shown that burnout has a negative impact on memory, ability to focus and concentrate, and attention to detail. This results in decreased ability for burned out healthcare workers to carry out their jobs at the necessary level. Safety standards tend to lag, mistakes are made, and practitioners might even find that they care less and less about maintaining and improving best practices in their profession.

Burned out healthcare workers also tend to depersonalize their patients. When administrative edicts set very high standards solely on the volume of patient care, practitioners start to carry out these imperatives as though patients were mere units to be processed rather than human beings.

Burnout is a pervasive and corrosive aspect of the healthcare industry that must be addressed and prevented. Thankfully, there are ways to address the problem before it further erodes healthcare systems. One key area to address is communication. It’s been shown that when communication is improved and clarified, clinician workplace satisfaction rises significantly.

Another way to help prevent or cure burnout in healthcare is by helping to make personal health and wellness a priority for practitioners. When hard-working healthcare workers slow down and take some of their vacation time, integrate or improve effective exercise and nutrition practices, and even speak to counselors, burnout symptoms begin to subside.

Since burnout rates are so high, perhaps the most important way to prevent further growth of this problem is to start identifying the problem. There are diagnostic tools that healthcare administrators can use to identify burnout in their workplaces. Once a problem is identified, the administration can begin to find ways to improve communication, foster self-care practices, and facilitate easier workflows. When we are able to recognize burnout and see it as a systemic, rather than personal, problem, it is possible to make progress in the struggle against it.