How Much Can Healthcare Admin Executives and Managers Earn?

The real earners in healthcare are behind the scenes

Despite the fact that doctors are widely synonymous with a high paycheck, the highest earners in the medical community actually work behind the scenes. Healthcare management and executives are far and away the highest paid members of the healthcare industry.

Health administration is becoming more and more necessary by the year. As more of the American population starts to age, healthcare needs are affected accordingly. Baby boomers reaching retirement age will begin to require more frequent and intensive care at an unprecedented level.

Healthcare administration members work under a great deal of pressure. They’re the ones ultimately accountable in matters of policy, finance, and health care reform. Failure to meet regulations in any of these areas could result in hefty fines, restrictions, or, in some cases, even criminal prosecution. On top of that, they also must make sure the organization or facility is running smoothly. The challenges faced by healthcare administration is reflected in the fact that the turnover rate for hospital executives was as high as 18 percent in 2017 (for the fourth year in a row).

The high salaries received by healthcare administration reflect the level of responsibility that’s required to competently do their job.

In 2015, Becker’s Hospital Review published a compilation of healthcare management compensation statistics. Here’s what the Review uncovered about the base salaries of health administration executives: 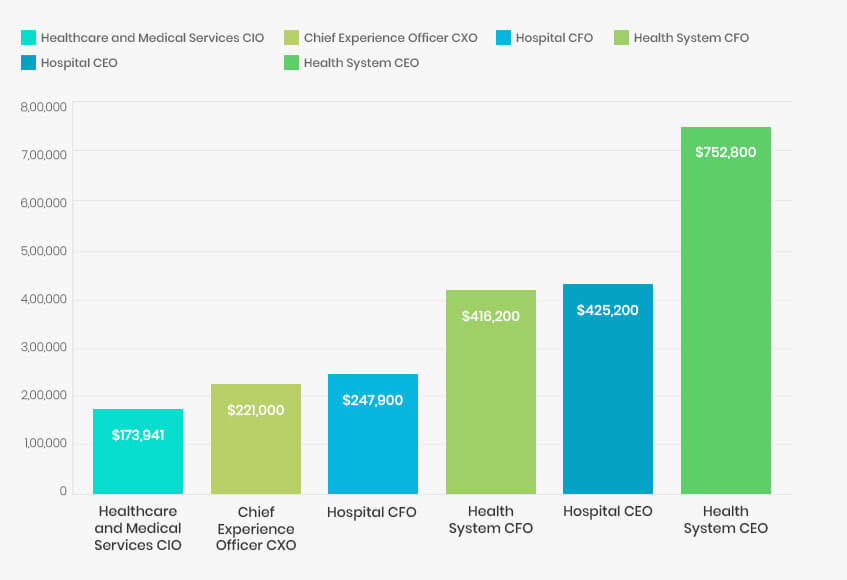 Base salaries for health management executives aren’t going down anytime soon either. As of 2014, industry data showed continued growth in base salary for members of healthcare administration.

As an example, here’s the breakdown in how each position experienced growth in base salary between 2013 and 2014. 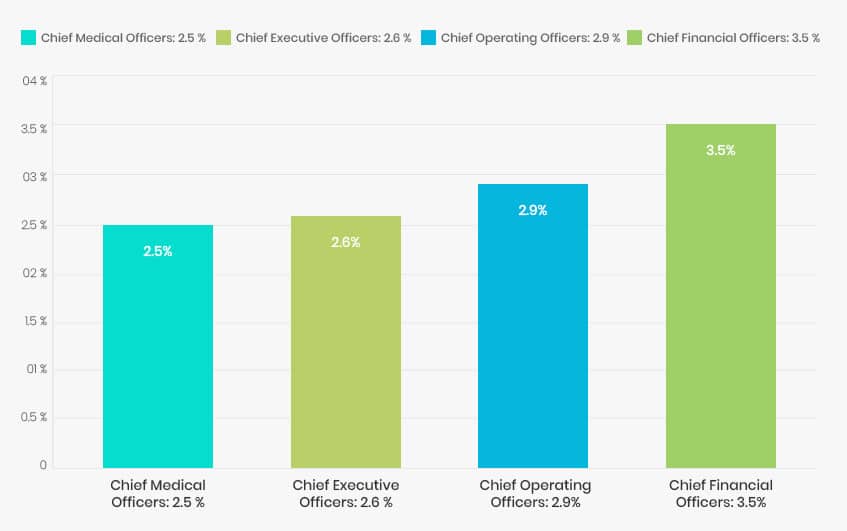 Compensation for executives at independent hospitals: 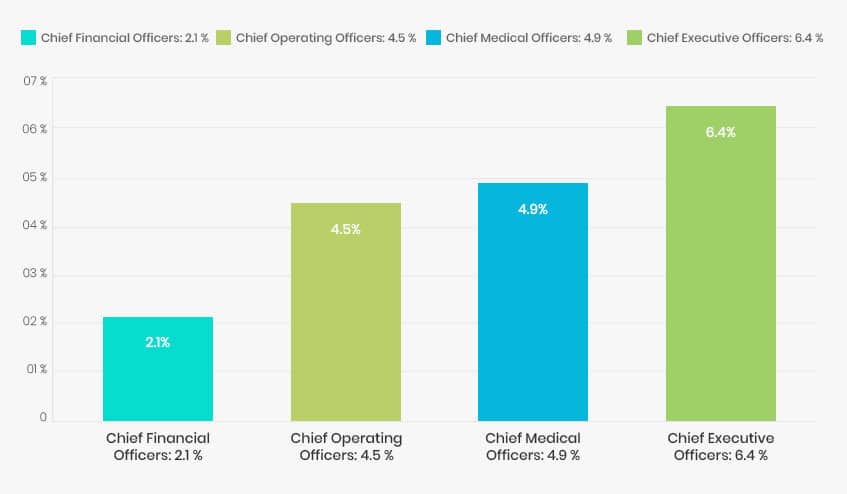 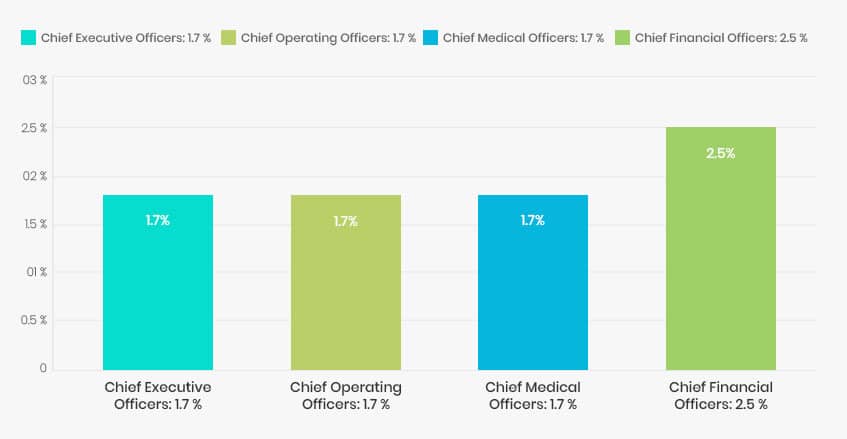 The actual numbers are already sky high without even taking into consideration the fact that most healthcare administration also benefit from additional perks (such as stock options and bonuses) within their compensation packages; in fact, the perks may comprise the majority of their payment plans.

According to the 2013 National Healthcare Leadership Compensation Survey, which was sponsored by Integrated Healthcare Strategies and the American Society for Healthcare Human Resources Administration, as many as 80 percent of hospitals and healthcare groups offer their executive staff compensation in the form of short term bonus incentives outside of their base salary.

For example, Daniel Loepp, the CEO of Blue Cross Blue Shield, earned a total of $13.4 million in 2017; however, his base salary was just $1.5 million. The rest of his earnings were made up of $10.3 million in bonuses, as well as an additional $1.5 in added benefits like car service and life insurance.

In 2012, it was reported that Kenneth A. Samet, head of the hospital group MedStar Health Systems, earned a total of $6.3 million per year. This was comprised of a $1.2 million base salary, $1.5 million in benefits and added compensation, and $3.5 million in a retirement fund.

These hefty benefit options are designed as incentive to draw the best and brightest of the health administration industry to the facilities offering the packages.

This is also a reason that health management pay tends to keep climbing every year; it typically takes a significant increase in pay to draw an executive from another high paying job. In order to stay competitive, healthcare organizations are finding that they need to get creative when it comes to sweetening the pot for prospective new management.

As the country’s health needs grow and more money is funneled into the healthcare sector, insurance and health organization management are reaping the benefits.

Americans are increasingly finding themselves needing to pay for healthcare costs, and the profits are going into the paychecks of healthcare CEOs and administration. According to a 2014 study, about a quarter of Americans’ annual medical costs go toward management salary and compensation.

The numbers seem high because they are; healthcare executives are finding themselves facing more professional demands than ever before, and are being paid accordingly. New technology means that healthcare groups are constantly updating their systems and protocol. Regulations and healthcare policy are frequently changing.

Some of the major challenges faced by healthcare administration in the U.S. include the following issues:

It’s up to healthcare C-suite executives to make sure their businesses have all of the resources and information they need to succeed.

A survey conducted by Modern Healthcare found that the total cash-based pay for health management positions increased by 6.3 percent in 2015. In addition, the complete compensation package offered to healthcare CEOs reached an average of $1.2 million per year; an increase of 8.2 percent from the previous year.

Some of the positions in the health administration field that have recently enjoyed especially large salary growth include:

According to data found in Sullivan Cotter’s Manager and Executive Compensation in Hospitals and Health Systems Survey, the following healthcare administration positions enjoyed the largest growth in total compensation (including cash bonuses) between 2014 and 2015:

Many healthcare organizations base their incentive packages on criteria such as patient satisfaction, employee engagement, and quality of service. Both short term and long-term benchmarks may need to be met to reach bonuses, providing enticement for executives to keep an eye on the future while making sure the present runs smoothly.

Performance based pay plans are becoming increasingly common in the medical community. Hospitals and pharmaceutical companies are already using this model as motivation for increased performance, but higher-ranking management in the healthcare industry are also beginning to use performance-based compensation for their executives.

An example: Trinity Health System’s model of executive pay. According to a report published in Modern Healthcare, executives overseeing the healthcare system’s 93 hospitals have their salaries attached to their facility’s performance. Some of the criteria on which the hospital management was graded included lowered patient obesity rates, lowered smoking rates, and how well the hospital keeps patients from returning with the same issues.

At Trinity, ten percent of each executive’s pay plan is attached to hospital performance. According to Modern Healthcare’s report, “of that amount, 20% is tied to reducing hospital-acquired infections and decreasing readmissions; 20% to smoking and pediatric obesity rates; 20% to patient satisfaction; and 20% to workforce engagement.” Even the CEO is affected by this payment plan.

Effective executive recruitment is especially important in today’s politically charged climate. Changes being made to the Affordable Care Act, which shook up the industry itself when first implemented, are frequent and unpredictable. It’s up to the administrations of healthcare organizations to make sure they’re following the regulations as they take effect, and the pressure can be immense.

The U.S. Department of Labor’s Bureau of Labor Statistics (the federal government’s main research agency regarding matters of employment) released their findings from 2017 regarding the salary of medical and health service managers.

During this time frame, the BLS lists the following as the top earning industries for medical and health service managers:

The top paying states/districts for healthcare administration managers by annual mean wage are:

The top paying metropolitan areas for medical and health service managers are:

The top paying non-metropolitan areas for health administration are: